A Breaux vacation wouldn’t be a vacation without a hike, so we decided to do the popular Reef Bay Trail Hike touted by some magazine as one of the top 10 hikes in the Caribbean.  The hike is in the central part of the island; you park off of Centerline Road and hike down to the beach and back (map source). There is a short side trail to see Petroglyphs as well.  The hike is about 5 miles, maybe 5.5 with the side trail; plan for 2.5-3 hours and bring adequate water, because you’ll definitely sweat.

It had rained the previous night and the trail was pretty damp & humid.  It was surrounded by pretty dense jungle for the most part, similar to hikes on Hawaii.

His & her posing.  I guess David is trying to catch rain water?

The trail goes by some sugar mill ruins – doesn’t this make you think of Jungle Book?  I thought “where’s Mowgli?” 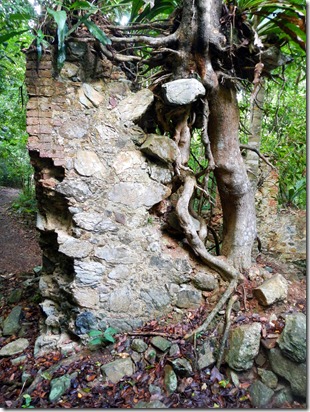 This was definitely a nature hike, bugs included!  Warning, big spider shot below that I almost didn’t put in since I hate spiders.  In order: a young buck, centipede, big termite nest, Golden Orb spider (I didn’t like seeing these and there were quite a few!), crabs, pineapple plants, and spiky lime tree bark (mango trees not pictured). 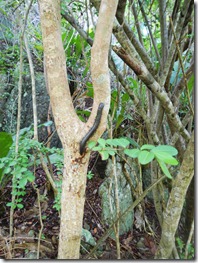 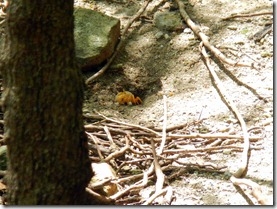 We took 1/2 mile detour to see the petroglyphs which are next to a waterfall.  They were pretty interesting, especially the crazy eyes.

At the end of the trail near the beach there is another sugar mill ruin.

The beach at the end is really beautiful; we really wanted to get in, but decided against it since we had tennis shoes and didn’t want to sweat with salt water & sand on the way up (this hike was really sweaty  – again, bring water!!).

I liked the hike, but it was pretty dense and jungle-y which isn’t my favorite.  I was really happy to jump in the ocean at Francis Bay, which was our next stop.  It was about the most refreshing feeling ever!