I’m continually amazed by all that California has to offer in a short driving distance; just 4 hours away from the Bay area lies Yosemite, a National Park like I’ve never seen.  Sure, a little more touristy as it is one of America’s most famous, but the best word to describe it has to be “majestic”.  It had been on our must-see list since we’d moved here.  Luckily, we got an invite from some friends with toddlers and were all over it!  We were so happy to see the National Park and also spend time with friends with young boys all the same age (18-20 months).  We couldn’t believe the views from our camp.

We booked heated tent cabins at Half Dome Village.  We were very happy to have the heat because it was still cold in March – expect snow on the ground and some trails closed but the cabin rates are cheaper through mid-March.  I wasn’t sure what to expect with the tent cabins, but they were fairly spacious and each had a good-sized bear box for food/scented items.  It was a step up from tent camping definitely – warm showers and nice restrooms nearby, as well as a lodge we used for dinner.  Note that cooking/camp fires are not allowed onsite, so we had planned on cold breakfasts/lunches and dinner out at the lodge.  When checking in the attendant was nice enough to give us four cabins in a little “cul de sac” with a picnic table outside, so after putting the kiddos to bed, the parents could enjoy a few drinks (bundled up!).  It was so nice to be surrounded by others in the same stage of parenthood – we could really relate!

The tents are great, but there are a lot of them in a short distance of each other.  If you’re trying to “get away” it’s a little crowded, but if you have little ones that require more attention/naps, or just like to have amenities, then this is a great option in the valley.  If you have a baby or toddler, a pack n play fits in the cabin, but I’d recommend either a couple layers or a sleep sack/good blanket to keep them warm.  Our heater was inconsistent; the first night was freezing and we were happy to have sleeping bags, but the second night was quite warm. 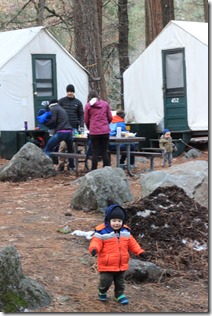 We headed out of the Bay area before noon on a Friday (recommended to beat traffic in to the valley) and then met our friends for pizza at the lodge.  The lodge options are pretty limited, but the pizza and beer is decent and they have a soup/chili option too (I liked the chili).  There is also a small grocery store in the village.  One of my favorite parts of the stay was seeing the moonlit glow of the snow on the mountains around us, it was pretty spectacular. 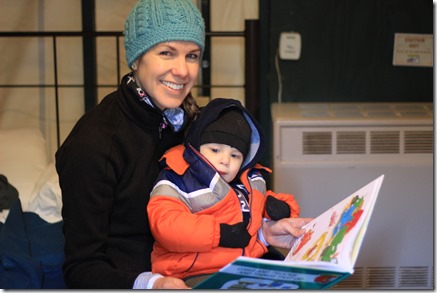 Our little guys were on a similar schedule, so they were our natural alarms and everyone was up by 6 AM, if not sometime the night before!  We opted for an easy hike/walk to Lower Yosemite Falls.  We got a kick out of the “Dad’s Club” photo below!

This was probably the most scenic waterfall of many in the valley!  We saw rainbows in the falls as we were walking up.  Unfortunately the end of the trail was closed due to the snow, but we made it to a good viewpoint. 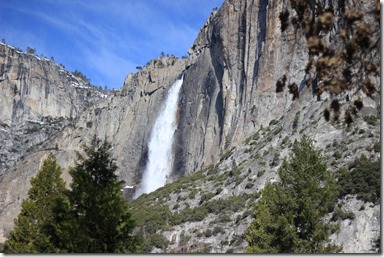 Then it was time for snack breaks and play time!

After a bit we headed back to the cabins for nap time and lunch.  I couldn’t get over how cute the four blondies were!

That afternoon we headed to Vernal Falls (also nearby is Mirror Lake but our friends had already done that trail so we wanted to try something new).  Vernal Falls had some nice elevation and neat views.  We would have liked to continue on to Nevada Falls, but the shorter route was closed and the winter route was pretty long.  We hiked up maybe 1/2 mile past Vernal then decided to call it a day as we were running out of snacks/drinks and new the boys tolerance in the packs would only last so long.  We got some sweet views of the Valley as the sun was setting though.

Thank goodness our kid loves to hike (for now)!

The following morning Nathan was up pretty early, so we decided to pack up and head out to beat traffic.  In retrospect we probably could have done a smaller sunrise hike, but sleeping with your kid in the same room can be tiresome, so we were ready to head back.  We loved our stay and were glad to have checked it out off season to avoid any major crowds/traffic!  We are looking forward to coming back and exploring some different/surrounding areas.  If you have been and have any recommendations we would love to know!

3 thoughts on “Yosemite Half Dome Village with Toddlers”