Hey y’all!  I’m back from a great 6-day vacation with David to St. John, US Virgin Islands (USVI).  I mentioned this before, so now I’m going to do a series of blog posts recapping some of our adventures & things to do on St. John. 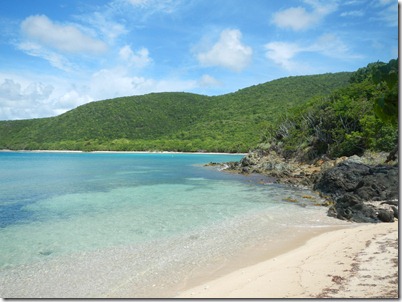 When we started thinking about possible beach-y vacations, we knew nothing about the Caribbean other than what we saw on Pirates of the Caribbean, but we liked the idea that the Caribbean was close and relatively unknown for us.  David and I did quite a bit of internet research on the various islands, and almost landed on St. Lucia for its beauty and hikes, but when we saw sky-high plane tickets we decided against that one.  We settled on St. John since both my mother-in-law & father in-law had been there (and blogged about it here) and my sister-in-law and her husband just went there in April and highly recommended it.

If you’re like me and knew nothing about the Caribbean or USVI, here’s a map (source) to orient you.  St. John, St. Thomas and St. Croix make up the US Virgin Islands, and St. John is known for being less populated, having great beaches and comprising of 2/3 National Park.  High season is mid-December to mid-April, so rates are higher and there are more people, but the weather is better.  June through November is rainy/hurricane season, so there is some risk of bad weather, but we lucked out with great weather in early July, plus rates are discounted.  It was in the 80’s most days and for us Houstonians, that was very cool!

There aren’t too many holidays/festivals on St. John, but we happened to be there during “Carnival” – a huge celebration on the 4th of July.  We stayed away from most of it, but it was a pretty big deal for the locals and tourists alike.

As far as culture on St. John, it has quite a bit different vibe than that of Hawaii or other islands I’ve been to.  This is probably because the island is extremely tourist-based and is well-known for rum.  There were a lot of tourists visiting from the south that I’d describe as “Red Neck Yacht Club”, if you know that country song.  They loved playing their country music on the beach and drinking all day, which is fine if that’s what you want to do, but wasn’t much our thing, so we stayed away from it.  The city of Cruz Bay was a bit crowded and dirty, so we didn’t go in to the city except for groceries and such.

The Virgin Islands don’t require a passport, so are pretty easy for US Citizens to get to.  Travel, however, did take a little longer than we expected.   I thought the Caribbean looked so close to Texas, but it definitely took a full day of travel to get to and from St. John.  We flew from Houston to Miami, then to St. Thomas (both short 2-3 hour flights).  There are two ferry options from St. Thomas to Cruz Bay, St. John: the Charlotte Amalie which departs less frequently and is 5 minutes from the airport and is ~45 minutes on the water, or the Red Hook Ferry, which is a 20-30 minute taxi across the island and a 20 minute boat ride.  We took the very wind-y (Mr. Toad’s Wild Ride) taxi across St. John to catch the Red Hook Ferry since it was our only option as we arrived later in the day.  We had 45 minutes to kill upon arriving at the ferry station so we sampled some local (pretty good) St. Johns Summer Ale.   The boat ride was quick and not too wavy.

On the way back to St. Thomas, we did opt for the Charlotte Amalie Ferry and it is VERY small – the pictures below show only three of the 4 rows on the boat, so you get the idea (I’m posting these for others that might get motion sickness like myself).  Luckily neither boat ride gave me problems.  On the plus side, you do get to see some of St. Thomas by taking this ferry, and if you are lucky you will see a PIRATE ship! 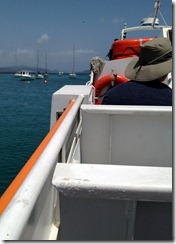 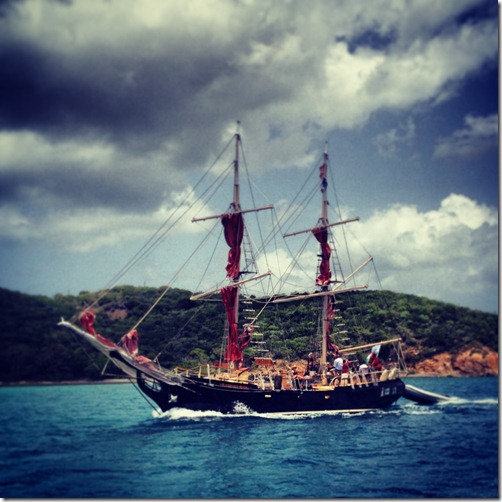 Upon arriving in Cruz Bay we got a jeep in town.  I didn’t understand why a jeep was necessary until riding around; the island is very hilly, with some VERY steep grades.  I wouldn’t have felt comfortable in much other than a jeep.  They also drive on the left side of the road and you have to watch out for crazy tourists crossing over the yellow line and not staying in their lane – thank goodness David was doing all the driving!

St. John isn’t too large and there are two main areas to stay: the West Side is Cruz Bay, which is the most populated city and the main port and the East side is Coral Bay, much less populated with a very small city.  So you can pick if you prefer to be near the city and activities or would like to be a bit more alone and drive to activities.  It’s sort of a toss-up.  We ended up at the Westin St. John last minute, and enjoyed some of the amenities (local free beer tastings followed by rum on the beach, yes please!) and that it was pretty un-crowded.  I really liked the yellow ocean floats.  There are a ton of villas and vacation rentals as well, which our sister & brother-in-law had very good luck with. 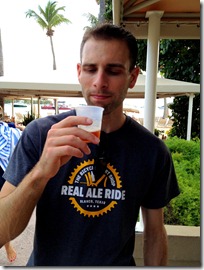 I’ll cover this more in detail over the next few posts, but St. John is mainly known for its beaches.  So we did a lot of snorkeling, some diving, a Catamaran sail and a little hiking.

You’ve probably realized by now I really like local, plant-based foods and meals, which wasn’t as abundant as one might think on St. John.  Now the food wasn’t bad or anything, but it is all imported from the mainland or other islands, so it’s VERY expensive and came a long way.  We cooked ourselves a couple nights and made our breakfasts & packed lunches every morning.  There is one large grocery store just outside of Cruz Bay (Starfish Market) if you want to purchase foods.  Breakfast pancakes at the Breaux villa:

We did eat at a couple restaurants and they were all fairly good – local fair was very “beach café” with lots of mahi fish, kabobs, etc.  I’m not much for rum or mixed drinks in general, but I found that I really like the “Dark & Stormy”, a mix of Ginger Beer & Rum.  I think the drink is supposed to be with dark rum, but I had it with light rum, so technically it might be a “Dark & Partly Cloudy”!

Next up is a recap of the beaches & activities we did!