I almost want to name the title of this post “Nailed It”, because I really felt like I got the Olympic distance right this time!  Last year at TriRock (different race, almost the same course), I really overdid it on the bike and had a very difficult and hot run.  By pacing myself on the bike and with the help of a wetsuit swim, I was able to PR by 10 minutes, so I’m pretty happy with it.

Before I rant about how disorganized this race was, the really cool thing about it was that before the age groupers start, the pros and paratriathletes started.  It was very inspiring to see so many paratriathletes competing, some of them who are wounded warriors.  It made any obstacles I might face in my race seem silly and inconsequential, and made me very thankful for the opportunity to race.  A really great add to a Memorial Day race; I was happy to be there to cheer them on at the start.  And the other neat thing was the big Houston crew participating – quite a few people I knew from swim team, work, and my new tri club were there.  Here’s me & Cara looking about as cute as you can in swim caps right before the race! 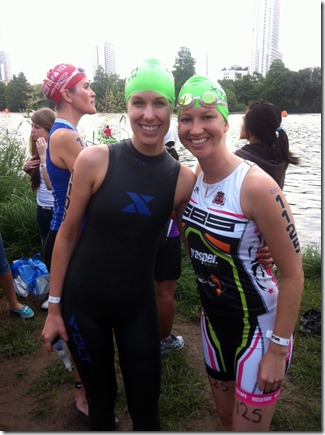 My only leg with minor disappointments might be the swim.  I broke a 2:00 minute pace with the help of the wetsuit, but I swam long to avoid crowds and ended up way far left of the buoys.  I think I should have done a bit better and broken thirty.  I was just having a ton of collisions (even have a knot in my head from being elbowed in the head!) and I chose to swim out rather than into people.  I still never “got into” my stroke like I do in practice; with open water swimming my form goes out the window unless I really, really concentrate.

The bike was 4 laps, and I think 4 laps is too much of anything, so I found it a bit repetitive.  It was quite hilly to where I was standing on quite a few of the hills and changing gears a lot.  There were also a number of sharp 90 degree turns on the course, causing a lot of slowing down to avoid other triathletes.  So not my favorite course, but not a bad pace considering.  I kept my HR at 155-160 bpm: a nice, difficult cruise pace for me (but not hammering) and ate two Gu’s on the bike.  I had a minor issue on the 4th lap when I had to brake quite sharply at a turn due to the high number of others in the turn and used both my front and rear brake, which then caused my front brake to start to rub.  It’s an easy fix at home, but I’m a little frustrated that it the brake itself was so loose and was not adjusted properly in the first place.  I didn’t stop to fix it because it was the last lap.

The run was two loops, which I found pretty manageable.  I kept my HR at 160 for the first loop, then gradually brought it up during the second.  During the very last mile I had some major stomach cramps that I’ve never felt before, so I’m attributing them to the overly rich pasta sauce I had at a restaurant the night before.  I just wanted something like Ragu red sauce, but whatever they brought out was more like a creamy bisque soup.  Maybe I should ask for vegan pasta sauce next time

Anyway, it was only the last mile, so I survived the pain, but didn’t have as great a sprint finish as I’d like.

I’m overall pretty happy with the time.  A very solid 6th, and looking at my Garmin stats my speeds and heart rate were right where I wanted them to be.  My transitions have been pretty speedy too, no hiccups there.  Just a little OWS work to do now!

I thought this race deserves a quick review, since I’m not the only one that was disappointed in the disorganization, especially considering how expensive the race was.  I heard it was Lifetime’s first year (that they bought out the original sponsor maybe?) so there were some transition difficulties, to say the least.  Please feel free to skip over this part since it’s a lot of complaining, but I would definitely think twice before participating in this one again, and I’d recommend doing TriRock well before CapTex if you’re looking for an Oly race in Austin.

On the positive side, witnessing the pro & paratriathlete starts was great, Zico coconut water (a sponsor) had an awesome DJ on the run course, and there was tons of crowd support!

To finish up, here are a few scenes from around town – Torchy’s Tacos, Crepes Mille, and post-race lunch on the lake.

Oh, and David driving home in his new Oakley’s.  He especially loves them since he got hit on while wearing them while I was still racing.  Guess I have to keep my eyes out or get faster.  Hope you guys had a great Memorial Day weekend too!