So I was being REALLY good about resting last week – no running, and just one light swim session.  But I guess my sore calf was a warning of something bigger:  I got up Friday morning and while getting ready for the  day I noticed a dull ache in my left leg.  I didn’t think much of it and took off for an appointment.  While driving, however, the pain didn’t go away and the car ride became very uncomfortable.  In fact, the pain came and went all day and into the following night, even waking me up at night.  I tried a bike ride the following morning, to get my mind off of it and to “move things around”, but no such luck, it only worsened the problem.  So for the next two days I rested and experienced more mild discomfort.  Today (Monday) the pain is gone, but I’m definitely concerned it could resurface if I try working out.

I went to my doctor, and she’s pretty sure it’s Piriformis Syndrome – irritation of the sciatic nerve due to piriformis muscle spasms, probably because it’s over working and compensating for other muscles.  It doesn’t surprise me since my feet pronate which cause inward rotation of the knee, which in turn affects the hip/glute area muscles.  Plus, I never do hip abductor-type moves.  From the internet searches I’ve done, Piriformis Syndrome can have sudden onset, kind of like I experienced.

I’ve been pretty bummed the last couple of days, but I can’t do much about it, except ice, ibuprofen, BioFreeze and rest.  I’m working to schedule an appointment for A.R.T. (Active Release Technique) therapy, in hopes that it can get some treatment before the race, then I’ll start physical therapy after the race.

Not too much to report on last week’s training, other than ~6000m in swimming and a few hours of biking.

To get my mind off of injury over the weekend, we hung up race medals, a gift from Mrs. Breaux from Allied Medal Hangers: 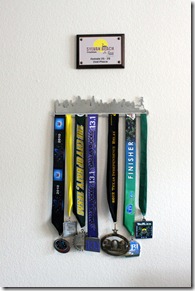 I love them!  We also bought some bedroom furniture (finally) and I even baked a rhubarb pie, David’s favorite.  But I’m a bad blogger and we dug into it before I could take a picture.  Trust me though, it’s really good.

Ok, that’s all for now.  I’ll try to keep you guys informed as this progresses!