It’s November already!  Hard to believe.  It did not feel like it in Houston today.  Here is what my steamy office window looked like (and it’s steamy for no reason other than humidity!).

Today started off pretty regular, except there is now a boy in my apartment!  David finally moved in, but he was jet lagging, so I found him on the couch this morning.  I started Monday off right with banana and raspberry oatmeal and Lavender Green Tea – my latest addiction.

Then it was off to work, which was.. work.  At home I made David the Sweet Potato Lentil salad I’ve been eating (no, I’m still not sick of it yet) and now he’s behind me continuing to put Ikea furniture together.  We bough a large wall mirror, dresser for me, and desk for David on Sunday at Ikea.  Here’s David working away; I should mention he’s way excited about Ikea instructions (insert sarcasm):

Other than mounds of Ikea panels, we had a pretty good Sunday (Halloween that is).  David woke up late, and I baked him Oatmeal Brulee from Kath Eats. 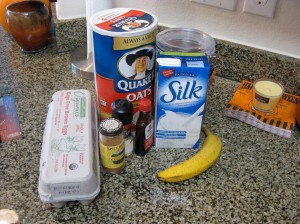 It was delicious, and David liked it too – success!  I’ll have to make this one again.  I topped it with a Fage/Cashew Butter mix.  Even the pumpkin was happy about it. 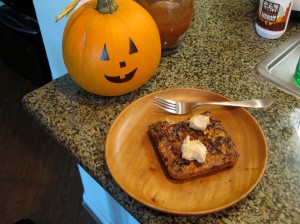 And to make it an even better morning, David brought me some Aussie presents – a soy candle and chai tea, mmm, I think he knows me well.  Do you like my squash arrangement in the background?  That will be dinner later this week. 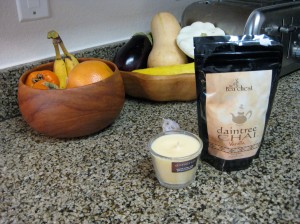 And lastly – I owe you a post on goals since it is November.  But it’s already 10 PM (when I fade) and I have an early meeting tomorrow, so I’ll update next time.